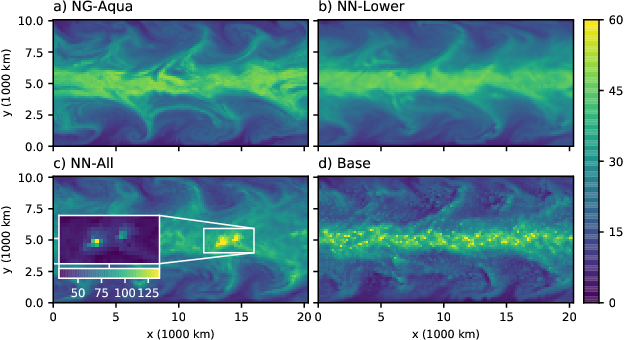 General circulation models (GCMs) typically have a grid size of 25–200 km. Parametrizations are used to represent diabatic processes such as radiative transfer and cloud microphysics and account for sub-grid-scale motions and variability. Unlike traditional approaches, neural networks (NNs) can readily exploit recent observational datasets and global cloud-system resolving model (CRM) simulations to learn subgrid variability. This article describes an NN parametrization trained by coarse-graining a near-global CRM simulation with a 4~km horizontal grid spacing. The NN predicts the residual heating and moistening averaged over (160 km)^2 grid boxes as a function of the coarse-resolution fields within the same atmospheric column. This NN is coupled to the dynamical core of a GCM with the same 160 km resolution. A recent study described how to train such an NN to be numerically stable when coupled to specified time-evolving advective forcings in a single column model, but feedbacks between NN and GCM components cause spatially-extended simulations to crash within a few days. Analyzing the linearized response of such an NN reveals that it learns to exploit a strong synchrony between precipitation and the atmospheric state above 10 km. Removing these variables from the NN’s inputs stabilizes the coupled simulations, which predict the future state more accurately than a coarse-resolution simulation without any parametrizations of sub-grid-scale variability, although the mean state slowly drifts.