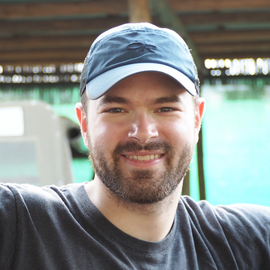 Noah Brenowitz is a Senior Research Scientist at NVIDIA. He completed a PhD in 2017 in Atmospheric-ocean Science and Mathematics at NYU’s Courant Institute of Mathematical Sciences with Andrew Majda as his Advisor. While there he developed a strong background in applied mathematics. Since then he has focused on improving climate models with machine learning with Christopher Bretherton, first as a Moore/Sloan & WRF Innovation in Data Science Postdoctoral Fellow at the University of Washington (UW) and then later at Vulcan and AI2. Noah has led the publication of several foundational papers in this burgeoning field. He enjoys spending his free-time in the beautiful mountains of the Pacific Northwest during all seasons of the year.

Loading NetCDFs in TensorFlow
NetCDF is a ubiquitous binary data format in the geosciences. While it may not be widely known in other domains it has several advantages. Most importantly it can efficiently store large amounts of data and is self-describing.
Last updated on Mar 21, 2022 8 min read

Managing dependencies for reproducible (scientific) software
Using code written by others can save a lot of time, but we are generally better at managing our own code. We diligently commit our code into version control systems like git and write automated tests, but do not at all control (or even list) the code that is written by third-parties.
Last updated on Feb 13, 2021 12 min read
Calling Python from Fortran (not the other way around)
Please see the github library based on this blog post: https://github.com/nbren12/call_py_fort. I have gotten many emails about small bugs and environment/compiling issues with the code samples in this blog post that are hard for me to help with.
Last updated on Oct 7, 2022 10 min read
Useful Software
I use a lot of different software tools in the course of my research, so I need a way to keep track of them in case something destroys my computer. That is the purpose of this post.
Last updated on Jul 20, 2019 1 min read
Regridding atmospheric datasets
I am currently working with model output from the cloud-resolving model SAM. The full-resolution datasets are often too-large to load into memory because I have over 16000 horizontal grid points, and it is more convenient to work with coarse-grained data.
Last updated on Jul 20, 2019 2 min read
See all posts